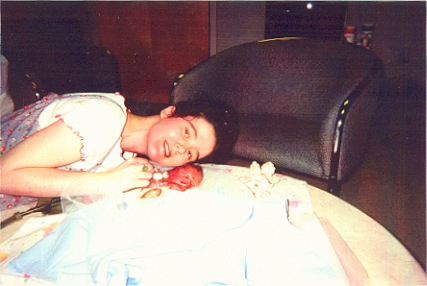 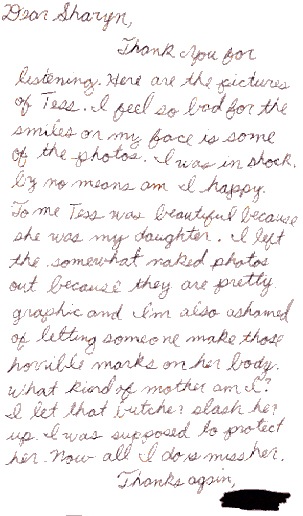 Handwritten Confession: Dear Sharyn,
Thank you for listening. Here are the pictures of Tess. I feel so bad for the smiles on my face in some of the photos. I was in shock, by no means am I happy. To me Tess was beautiful because she was my daughter. I left the somewhat naked photos out because they are pretty graphic and I'm also ashamed of letting someone make those horrible marks on her body. What kind of mother am I? I let that butcher slash her up. I was supposed to protect her. Now all I do is miss her.
Thanks again, 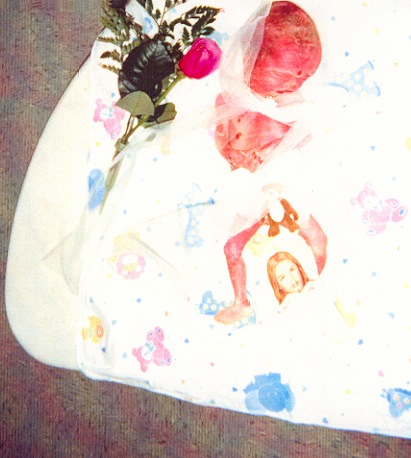 Little Tess: in swaddling clothes, with a beautiful rose, a teddy-bear, and a picture of Jesus, all implements to soothe the guilty conscience of the parents who have just killed their unique and precious daughter. 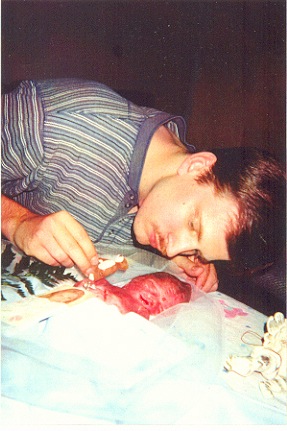 Dad: The little girl's daddy is giving her a teddy bear, just moments before she will be placed in George Tiller's incinerator, which he used to economically dispose of the bodies. Tess's mouth and nose are twisted. Hillary, Hollywood, Homosexuals, and Humanists support this, called partial-birth abortion. George Tiller used a a forceps to pull Tess's legs through the birth canal, and then delivered her breach, but stopped just before her head came out. He pauses at that point to first kill her, before delivering her all the way. Why? In a condemnation of America's Republican U.S. Supreme Court, he can kill her with impunity while her head is still within the mother, but a few inches further and he exposes himself to the crime of murder. With her head still inside, and Tess moving her arms and kicking her legs, Tiller pierced the back of her neck with a sharp instrument and then inserted a vacuum to suck out her brains. Now that Tess is dead, Tiller collapses her skull, and only then removes her from the protection of her mother's womb. 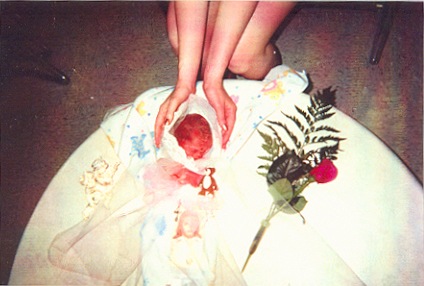 Sister Spared: The mom who here cradled her baby's corpse paid to have her daughter killed because she had cystic fibrosis. Tess now has a sister, born in early 2000, who also has CF, but the precious little baby sister was spared, and not executed for her crime of being sick. 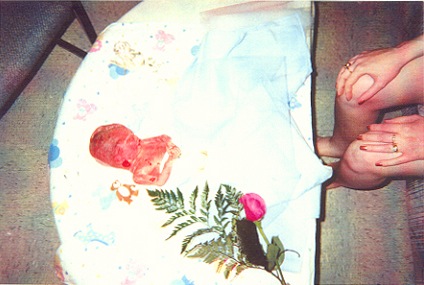 Wedding Ring: Note the wedding ring on mom. So often a mom who kills her baby is married and well off. Of course, a poor, single woman who kills her baby commits no less of a crime than a wealthy one. In the Old Testament, God condemned the wicked who sacrificed their children, killing them as an offering to the god Molech, who promised them happiness, if only the parents would kill their child. With all man's progress, not much has changed in 3,000 years.